Based on the thinking that “enriching mountains and forests means enriching oceans,” the project members groomed the bamboo forest edging into the broad-leafed forests to ensure that nutrients the ocean needs can flow into it, enriching both the ocean and the mountains. The thinned bamboo is also being used effectively. 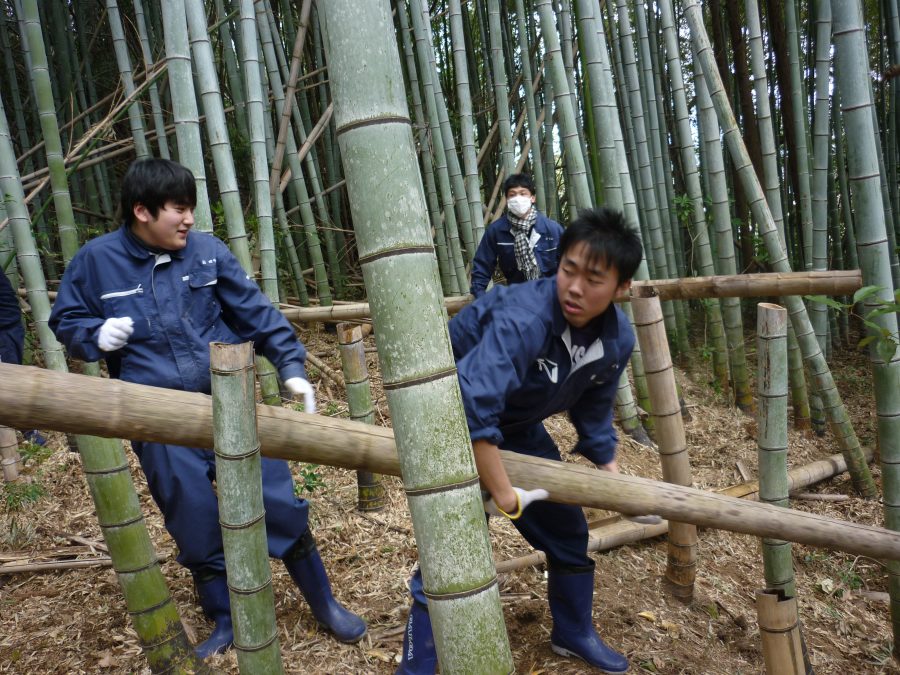 Students groom the bamboo forests on the mountains to help regenerate the sea.

Mount Omine is located nearby the high school and its virgin broad-leafed forest was being threatened by the expanding bamboo forest. That is why the high school gave the encroaching bamboo forest a much-needed grooming. By thinning the bamboo forest by cutting the bamboo at waist-height and making sure that the roots perish, the students managed to prevent further expansion of the bamboo forest. By helping the broad-leafed forests grow and the mountain regenerate, rain began to fall on the fallen leaves providing nutrients such as iron fulvate to the soil, which are then carried down to the sea over time by rivers. This enables nutrients from the mountains to flow to the sea through the rivers, so that the oceans can once again become rich and abundant with marine life.

[Activity 1] Grooming the mountain to prevent the expansion of bamboo forests encroaching on the broad-leafed forests produces a huge amount of thinned bamboo, which in itself is an important resource. To ensure that the project can be sustainable and cyclical in nature, it was essential to find an effective use for the thinned bamboo.
[Activity 2] The school created “bamboo charcoal,” which is being used filter water for the school’s aquacultures.
[Activity 3] Iron fulvate provides nutrients that are absorbed by phytoplankton and seaweed. Students made rice balls containing iron scraps and bamboo charcoal and placed them in the sea where desertification is prevalent.
[Activity 4] Students cut thinned bamboo vertically into long boards, combined branches and leaves, created fish reefs that were then attached to steel angle irons and placed in the sea.
[Activity 5] Using bamboo branches and leaves, students created brine water and used the bamboo as fuel to make salt. In the past, Tsuyazaki was well known for salt manufacturing. Students hope that their efforts will help revive the city.
[Activity 6] Using bamboo ash created while making salt, the students employed a traditional method of sprinkling seaweed with plant and wood ash to create bamboo ash seaweed.
[Activity 7] Students collaborated with other industries to create bamboo powder (fermented green bamboo powder shaved down like a pencil) that can be used to enrich soil for farming, etc.
[Activity 8] Using sturdy and flexible bamboo, students created portable bamboo tents, etc. 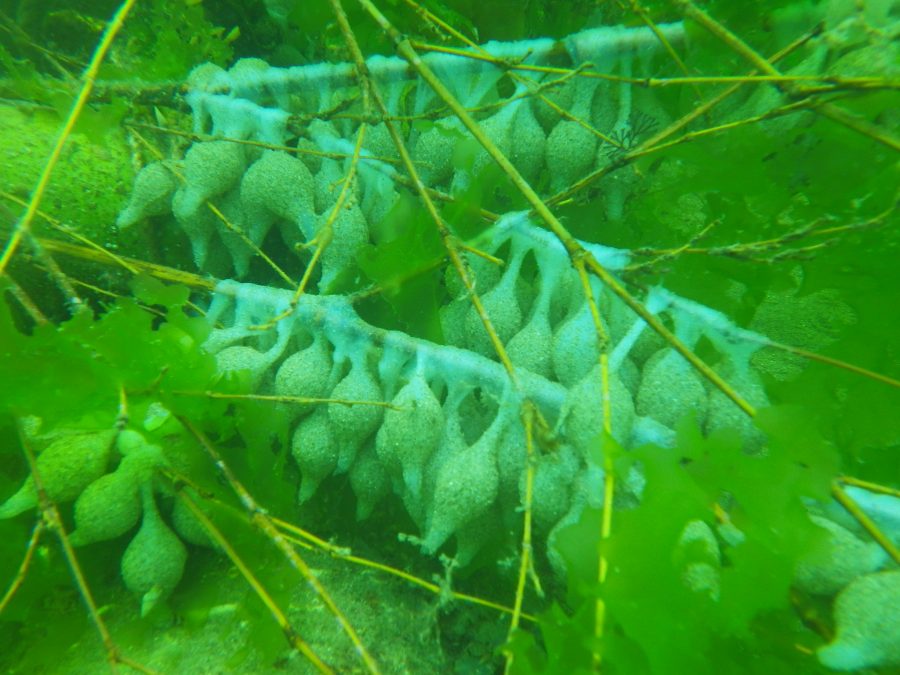 Bigfin reef squid had lain eggs on the fish reef made from thinned bamboo.