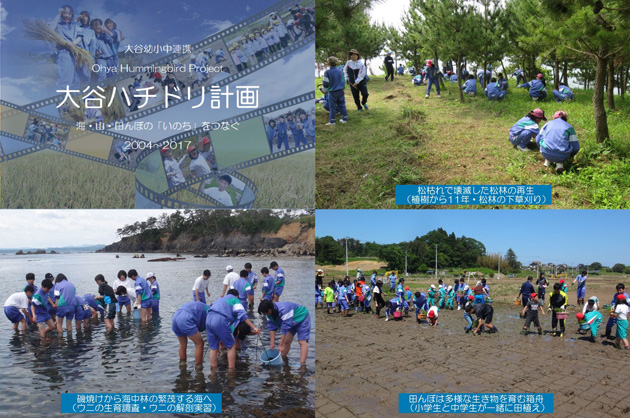 Ooya is blessed with the rich nature of the Sanriku region. But our natural environment is undergoing destructive changes, and the agriculture, forestry and fishery industries that once supported lives in the region are declining. Amid such destructive changes, children of the region are undertaking a wide range of activities to help regenerate and preserve the nature of Ooya and our livelihoods depend on it. 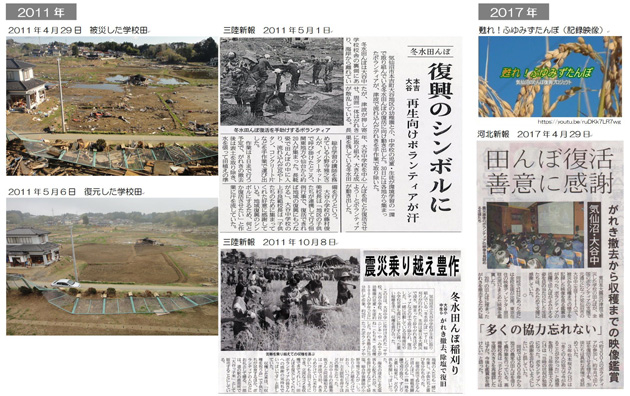 Ooya has received the gift of the abundant natural resources from the Sanriku coast where warm and cold currents meet. Thus, the region has long relied on the agriculture, forestry and fishery industries. But due to a decreasing and aging population and dwindling birthrate, there are fewer people working in these industries. As a result, the natural environment that has provided a rich bounty in the past is now left abandoned. Worse still, this enivornment has recently been suffering the effects of “Matsu-gare” (Pine Wilt Disease) and “Iso-yake” (Seaweed Deforestation, Shore Denudation) occurred.

In 2004, Wanting to save the environment in their hometown, the children of the Ooya Junior High School sprung to action. The causes of pine wilt disease and sea deforestatcion are environmental destruction and global warming triggered by human beings. These are a grave global issues, but the “Ooya Hummingbird Project (Ooya Hachidori Keikaku)” began with the desire to “do what I can do”, following the example of the hummingbird in a folk story who tried to put out a forest fire by carrying a tiny drop of water in her beak. Although the impact of one may be small, together, we can achieve great things.”

As the first step to preserving Ooya’s natural environment, the children learned about the causes of pine wilt disease and sea deforestatcion and developed countermeasures. These environmental changes were also tied to the decline of the agriculture, forestry and fishery industries. In order to preserve the livelihood of Ooya which has been long supported by these three industries, a program was necessary that would enable children to continuously learn about the regional environment and people’s livelihoods. It is why we began this project 13 years ago. In order to provide further support, the project is now working with Ooya’s kindergarten and elementary school, and it has evolved to become a regional initiative gaining the cooperation of local communities and families, we call such cooperation “regional collaborative education”.

In 2011, Tohoku was hit by a strong earthquake. A tsunami washed away the pine forests children had planted, and the rice paddies they had cultivated. However, a lot of volunteers came together from all across Japan and worked to restore the paddies, which enabled us to continue our project. In order to regenerate the paddies and their biodiversity, we launched a new project, “Project for Rice Paddy Biodiversity (Ikimono-tambo Project)”. In 2015, this project was certified by the partnership program of the Japan Committee for United Nations Decade on Biodiversity.