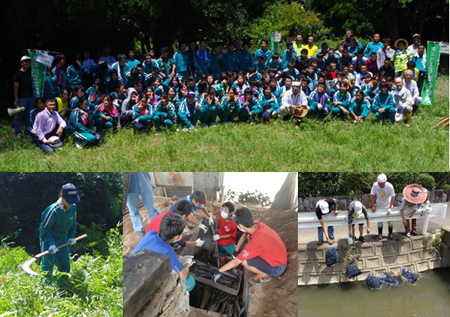 The Tenmei-Mizunokai promotes the creation of forests with rich broad-leaved trees to preserve biodiversity, and also aims to prevent floods, store water, improve water quality, prevent sediment runoff, to promote carbon fixation to rejuvenate water sources, and to preserve mountainous regions and the environment. And they teach this through fun games. 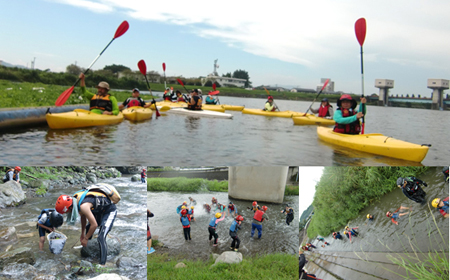 Also in 1994, they launched the initiative, “Creating Fishermen’s Forests.” Members, fishermen, as well as students in elementary, junior high, and high schools, and volunteers from the general public and companies have come together to plant 80,000 saplings of broad-leaved trees naturally found in the region in approximately 42ha of state-owned forests, town-owned forests, school-owned forests, etc. Each year, the group looks after the forests by planting new sapling, mowing undergrowth, cutting vines, and grooming the land.

Participants can have fun canoeing, playing in the river or ocean, and studying aquatic organisms, and the group also offers learning programs that focus on environmental education and prevention of water accidents.

For the past 11 years, they have continued to remove foreign aquatic weeds and to promote and protect biodiversity.

Using the terrain near the Midorikawa River and the ocean, the group promotes exchange among people of all ages, up and down river, in the oceans and mountains, by offering tours of the dam and opportunities to play in the river, burning reed grass near the estuaries, providing education on local production for local consumption, and by offering a platform for exchange.

In 2006, they built a charcoal kiln and began creating charcoal from waste bamboo used for creating shelves for nori cultivation in the Ariake Sea, which was then placed in the rivers for water purification. In addition to such work, the group continues to promote environmental education, which encompasses protection of aquatic resources such as clams, nori, and ayu (sweetfish), and also protects and promotes biodiversity. They also regularly communicate with other river organizations and various entities within and outside the prefecture, and with the Ministry of Land, Infrastructure, Transport and Tourism, Ministry of Agriculture, Forestry and Fisheries, regional forestry offices, and the city and prefectural administration. The group is open to members, as well as to the local government, and students from elementary, junior high, and high school, as well as the general public and volunteers from various companies. In addition to its own activities, the group has also received many requests to collaborate on educational seminars and has continued to offer as much support and assistance as possible.

* Chairman of the “Network to Regain a Limpid Midorikawa River Environment” – Masaru Hamasaki
* “Fishermen’s Forests”: Specified Non-Profit Corporation Tenmei-Mizunokai was the first to coin the name, “Fishermen’s Forests,” and to begin forestation activities under this initiative.