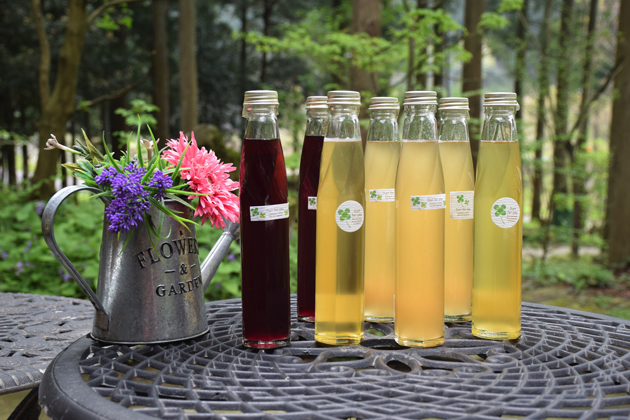 The Dongri-Kurabu for Natural Life in Forest Co. makes fruit syrup from plants native to the region. Fruit used to make syrup comes from plants, for example Gamazumi (Viburnum dilatatum), that have been cultivated from seeds. The club is currently cultivating over 800 saplings. 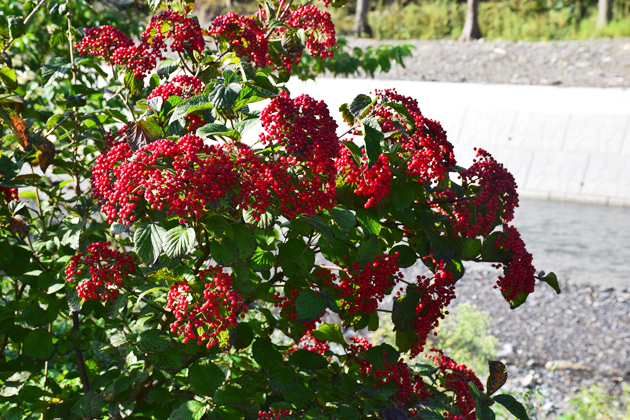 Mihamacho in Mikata County is a mountain village near the border of Fukui and Shiga Prefectures. The forest stretches approximately 6,000ha, but it had not created any employment in the past. The Dongri-Kurabu for Natural Life in Forest Co. was established in hopes of developing a unique forest industry unlike those based on cedar or cypress, one that took advantage of the multifaceted values forests offer.

Since its launch, the club has offered opportunities to experience nature, provided camp and BBQ facilities, and has begun cultivating Benidodan Tsutsuji (Enkianthus cernuus f. rubens) and mountain vegetables, but there were many challenges to commercialization. When they thought about shifting to a type of business that is industry-based, fruits that people are familiar with from their youth came to mind. They decided to first start with Gamazumi (Viburnum dilatatum) and attempted making syrup. Not only was the syrup delicious, but they also ended up with far more volume than initially estimated. Since then, they have added syrup from Natsuhaze (Vaccinium oldhamii), persimmon, quince, yuzu (citrus junos), Natsumikan (Citrus natsudaidai), and jujube to their line-up.

In the beginning, however, production quantity was low, so the operation was quite small. But 5 years ago, the club ramped up production. In fact, they made 70kg of Gamazumi syrup and 150kg of quince and Natsumikan syrup combined in 2015. And in 2016, they began experimenting with Yamaboshi (Cornus kousa). The syrup is being sold in small quantities at the café the club operates, “Morino Nakano Kissaten (Coffee Shop in the Forest)”. And towards the end of 2015, these products were selected by the local government as thank you gifts to “furusato nozei” or hometown tax payees and the products are also now available in Tokyo. Moreover, since the end of 2016, these products are being sold online, on Rakuten Ichiba. In addition to ensuring sufficient output, the club is also coming up with new recipes using syrup such as juice, ice cream, yogurt, sauce, and parfaits topped with fruits.

To produce Natsumikan and quince syrup, the club has enlisted the help of the community. And they have also welcomed a new member to the harvest team last year. If all goes well, this project may become a regional industry.