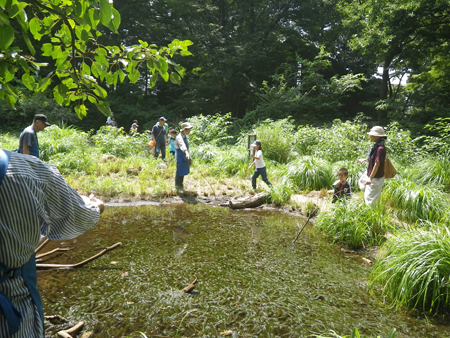 The Inokashira Park Zoo has set aside a part of its grounds (1300m2) as a place where people can experience nature and have fun looking for and catching living creatures. The objective here is not to show people, rather for people to discover living creatures for themselves. 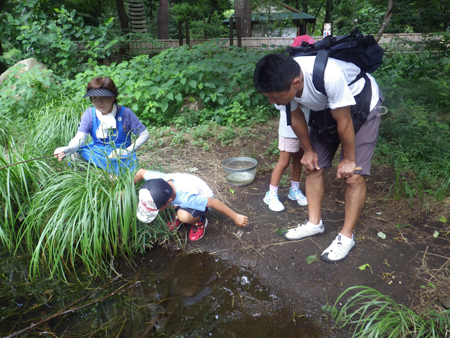 The Inokashira Park Zoo spent one and a half years from June 2010 to transform a part of its grounds (1300m2) into a playground where people can enjoy nature and try looking for and catching living creatures. The living creatures that can be found in this playground were not placed there. They have naturally come to live there. And the playground’s main objective is not to show people, but for people to discover living creatures on their own.

The playground has a wide variety of environments from a wooded area, a meadow, to ponds with vegetation that insects the zoo wants to attract like. For example, oranges and yuzu attract swallowtail and other butterflies, Japanese storax attracts fungus weevils (Exechesops leucopis), Akebia or chocolate vine attracts the Eudocima tyrannus moth, etc. While creating a cozy habitat for living creatures, the zoo also has designed the playground so that these creatures would be easy to find with observation boards (boards placed on the ground, which may be opened for a closer look at creatures that live underground), observation sheets (wrapped around tree trunks that may be peeled off), a mountain created with stacked rocks, tinder, etc.

The playground is open from 11:00 to 12:00 every Sunday from April to October and every second Sunday of the month from November to March. It may also be used for group sessions. The playground is only accessible at these times to prevent deterioration of the environment due to human traffic and also because of staffing issues.

The playground is operated by staff in charge of promoting education (around 3) and volunteers (around 10). They help people experience the joy of discovering living creatures. (Insects are difficult to find if you don’t know where to look, so the staff’s support is especially helpful).

Usually around 130 visitors (1/3 have taken part before, 2/3 are first-timers) mainly comprised of children in preschool or younger and their parents take part in each session. In order to maintain an environment that attracts a diversity of insects, the zoo conducts monitoring surveys 10 times a year. And to preserve the environment, the staff and volunteers undertake large-scale maintenance 3 times a year by cutting and pruning grass, tilling the land, and cleaning the ponds.