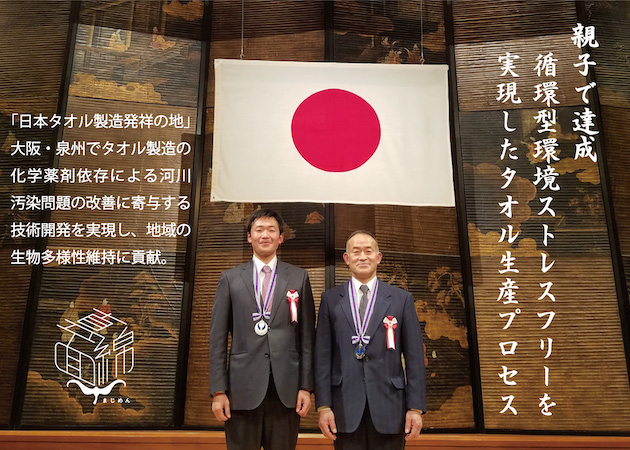 Senshu in Osaka Prefecture is said to be the “birthplace of towel production in Japan.” But its reliance on chemicals has resulted in polluted rivers. Smileyearth Corporation. has developed a technology that helps alleviate the problem, and thus is contributing to the preservation of biodiversity and sustainability of the local industry. 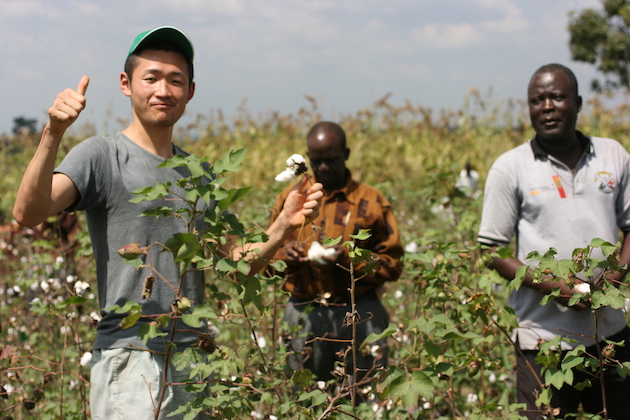 How it all started
Since 1887, for approximately 130 years, towels have been manufactured in Senshu, Osaka, the birthplace of Japanese towel production, and Smiley Earth is one of its long-established towel manufacturers. For nearly 70 years, over 3 generations, the company has worked together with the local community to manufacture towels and keep the traditional industry alive.

From the mid-1990s to 2000s, the towel production in the region peaked, and the Kashiigawa River that flows through the region was ranked number one in terms of the worst water quality according to the public water quality survey conducted by the Ministry of the Environment. This drew attention to the amount of chemicals used during towel production as well as the wastewater polluted by a high concentration of chemicals used in the manufacturing process. During the process of manufacturing the staple of the region, the industry was polluting the community’s river, destroying biodiversity and the ecosystem. This became the springboard for the company to begin making the challenges it had to overcome to become sustainable visible, and to address those challenges.

What the company has done to resolve our challenges
The Smileyearth Corporation. was established in 2008, but from 2 years before its establishment, the company began building a towel manufacturing plant that could produce towels from start to finish. Traditionally with towel production, labor was divided, and each process was closed, therefore lacking transparency. To remove such downsides and to make a break from the traditional production process, the company built a truly end-to-end manufacturing plant that would enable them to develop a way to sustainably manufacture towels.
Moreover, the company also began sourcing its raw materials from East Africa, more specifically Republic of Uganda, often referred to as the “Pearl of Africa,” for its rich nature. The company directly purchases the organic cotton from the local farmers union thereby promoting fair trade. By building a relationship of trust with the farmers, the company began to understand the country better. They spent a long time working together with the local farmers to develop a sustainable supply chain of organic, agrochemical/chemical fertilizer free cotton. The relationship of trust served as a starting block for the sister city alliance between Izumisano City (manufacturing site for towels) where the company is based and the city of Gulu (where organic cotton is farmed), forged in 2017, which became the first sister city alliance ever signed between Japan and Uganda. Izumisano also signed up as the host town for the Uganda athletes’ delegation so that they can train there before the upcoming Tokyo 2020 Olympic and Paralympic Games. So, the relationship established in the process of securing a sustainable supply chain has contributed to the friendship between the 2 nations. The company has focused on CSR activities that extend beyond manufacturing to contributing to the realization of a sustainable society.

Going forward
The research and development that began in 2006 in order to realize the sustainable production of towels finally bore fruit nearly a decade later. In 2015, the company succeeded in independently establishing an environmentally-friendly towel production process. And in 2018, the company won the Minister of Economy, Trade and Industry Award at the 7th Monodzukuri (Manufacturing) Japan Award. So, its technological innovation has begun to draw much attention. It gives the company great joy that the technology that it has spent years developing has now been recognized for its contributions to biodiversity and ecosystem conservation.
Through its manufacturing activities, the company will continue to bring to life the passion that went into the name, Smiley Earth.