Incorporated NPO "Network for Promoting the Creation of Children's Forests"

This initiative encourages children in kindergartens and preschools across the country to nurture acorn saplings and donate them to help greening efforts in areas afflicted by the Great East Japan Earthquake. Using acorns, this brings together children across Japan and nurtures coexistence. 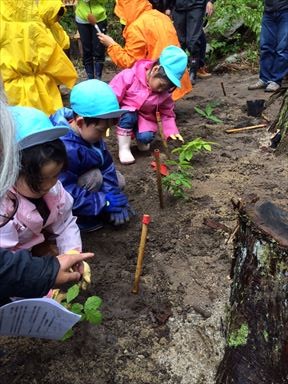 JP Children’s Forest – “Green Wave for the Recovery of the Tohoku Region” involves children in kindergartens and preschools across the country in greening efforts that benefit areas afflicted by the Great East Japan Earthquake.

During the first year, children in kindergartens and preschools in the Tohoku region gather acorns, which are then sent to children across the country. During the second year, children who received the acorns nurture them into saplings and during the third year, the saplings are sent to Tohoku and planted on “Green Wave Day.”

Green Wave for the Recovery of the Tohoku Region has 3 key objectives:

1) Nurturing “coexistence” among children
This initiative bridges the distance between children in afflicted areas and children in other parts of Japan to nurture “coexistence,” a quality important to children of the future, living in the post-Great East Japan Earthquake world.

Each year, approximately 3,000 children in 58 kindergartens and preschools across Japan take part in these activities. The first tree planting event was held in 2014, at Yamada-machi, Iwate Prefecture, an area that suffered significantly in the earthquake.