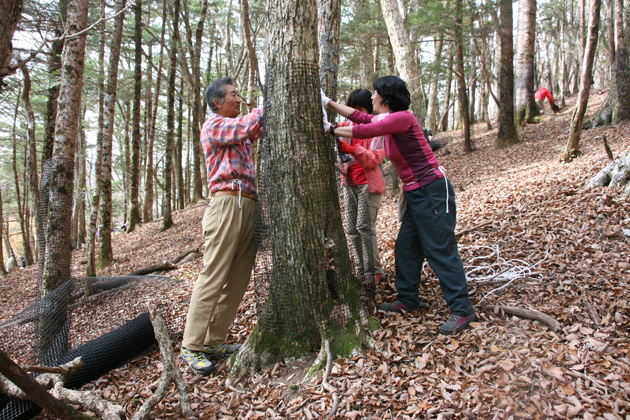 “Activities that protect Miune’s rich forests” aim to preserve the natural environment of Mt. Miune, which straddles the border of Kochi and Tokushima Prefectures. These activities include research and countermeasures against serious feeding damage by deer and activities to educate the public about “overuse” by climbers. 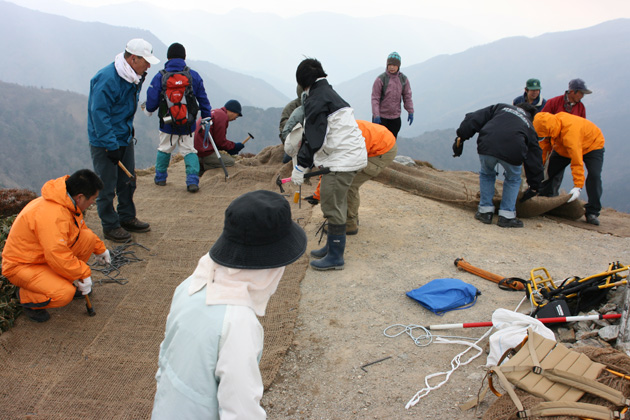 1. Activities to prevent feeding damage by Japanese deer
(1) Protecting colonies of Miyama Sasa veitchii (protected species in Japan) and Rhododendron tschonoskii from feeding damage: In 2010, in order to protect theses colonies, Tokushima Prefecture placed deer-proof fences near the Miune summit, but these fences become damaged due to snow cover and strong winds. Since 2014, the committee has been inspecting and repairing these fences to protect the area from deer.
(2) Protecting trees from feeding damage: Since 2010, the committee has been working with the Tokushima District Forest Office. They help wrap protective covering onto trees that are especially prone to feeding damage such as Abies homolepis, Clethra barbinervis, and Betula ermanii.
(3) Research about feeding damage and photographic reporting: Since 2008, the committee has been keeping a photographic report believing that sharing information about the current state of feeding damage with many residents of the prefecture would lead to effective measures. Three reports have been created so far, and 3 photo exhibitions and 3 presentations have been held.

2. Activities to mitigate overuse
(1) Restoring vegetation: Since 2007, the committee has placed nets over grounds that have become bare to help restore vegetation in Mt. Miune. The committee repairs and replaces these nets annually.
(2) Protecting Paeonia obovata Maxim (Tokushima Prefecture Red List: Critically Endangered +Endangered) colonies: In 2013, the committee placed 180m fencing around these colonies that were being illegally dug up. The committee repairs these fences every spring and also conducts regular observations.
(3) Preserving run-down trails: Due to overuse, trails turn into groove-like depressions. And rain water flows through these grooves further deepening them. Placing trees that suffered from feeding damage along these trails helps prevent soil erosion and helps trails recover to its original state.
(4) Promoting awareness for “mountain toilet manners”: These activities began after bacterium Escherichia coli was found in Miune’s waters. The committee encourages climbers and alpine clubs to “use the toilet before climbing.” They also organize lectures on toilet manners, clean the toilets on the summit of Mt. Miune, and also keeps an eye on toilet tanks. So far, the committee has conducted the “Miune Toilet Cleaning Initiative” twice.