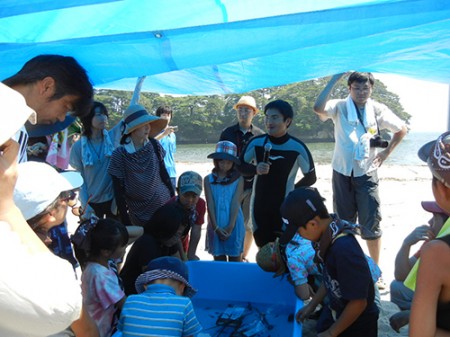 The Organization to Promote the Rejuvenation of Eelgrass Beds in the Matsushima Bay Area hopes to bring back eelgrass beds, many of which were lost due to the Great East Japan Earthquake. They organize nature observation workshops for families so that they can learn about the Matsushima Bay area’s nature, conduct research on remaining eelgrass beds, collect eelgrass shoots, and also study the causal relationship between eelgrass beds and fishing activities.

The Organization to Promote the Rejuvenation of Eelgrass Beds in the Matsushima Bay Area was inaugurated on February 1, 2012 primarily by the citizens of Shiogama City. It is a voluntary organization in which citizens, fishermen, and employees from respective governmental agencies take part. The organization is chaired by Shigeru Kuwahara, who also heads the Shiogama Chamber of Commerce and Industry.

For the nature observation workshops (August 22, 2012, August 22, 2013), the group worked with the Marinepia Matsushima Aquarium to organize study sessions on eelgrass beds and the marine environment of the Matsushima Bay, tours of the aquarium backyard, and wildlife observation sessions and beach seining for research purposes at nearby Donguri Beach. The day before this workshop, on August 21, 2012, 21 people including members of this group organized a training seminar. This helped train leaders, who will be capable of organizing regular experiential seminars on coastal environments that provide people with opportunities to interact with nature.

Furthermore, since February 2, 2012, the group has organized 20 surveys on eelgrass beds in the Matsushima Bay area and encouraged citizens to get involved in the rejuvenation of the eelgrass beds. They also collected eelgrass shoots on June 22 and July 9, 2013 from the shores of Shirasaki Beach on Katsura Island (one of the Urato Islands) where eelgrass beds can still be found. The seedlings collected were then cultivated off the shores of Kitahama in Shiogama City and replanted in November 2013.

On February 17, 2013, the group organized a symposium to promote their cause and to exchange ideas on how the coastal areas of Matsushima Bay can be rejuvenated.

Applying what they learned, the organization will continue to undertake initiatives that encourage citizen participation in the conservation efforts.

In September last year there was a mass oyster death in the Matsushima Bay area. It is widely believed that this was due to high water temperatures, but according to oyster fishermen, this may have been due to the depleted eelgrass beds. To look further into this causal relationship, the group visited the Hinase Fisheries Cooperative in Okayama Prefecture, where the fishermen are involved in efforts to cultivate eelgrass beds, with oyster fishermen to exchange ideas and to get a firsthand look at the situation in Okayama.