Working Together. Promoting and Raising Awareness of the Biodiversity of Terraced Rice Paddies 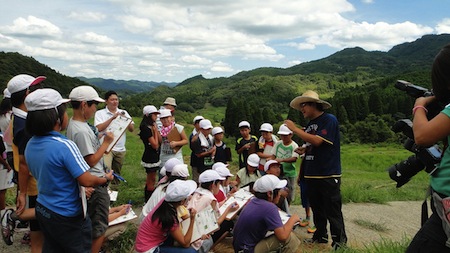 The residents and local farmers work together to survey living organisms in the nearby satoyama. Their key area of focus is “Ooyamasenmaida,” a region in Kamogawa City, Chiba Prefecture known for its terraced rice fields. They create a new medium for promoting and raising awareness of biodiversity in these terraced rice paddies and also organize nature observation workshops. 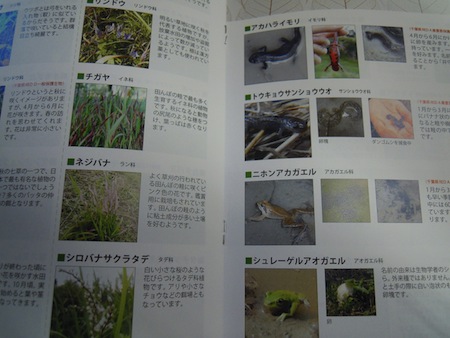 The southern part of the Boso Peninsula in Chiba Prefecture is covered by large stretches of broadleaved forests, which have become quite rare in Japan, and the terraced rice paddies that take advantage of the hillsides here are also drawing attention for their beauty.
In the Ooyama District of Kamogawa City, there are 3.2ha of terraced rice paddies, known as “Ooyamasenmaida,” that rely solely on meteoric water. The Ooyamasenmaida Preservation Committee was established in 1997 to revitalize hilly and mountainous areas, and in 2000, they implemented the ownership program for terraced rice paddies “to revitalize the region by promoting exchange between urban and rural areas” and “to preserve farmland.” 136 groups of city residents and local famers are working together to organize various activities, including nature experience workshops.

In this region, many rare and valuable organisms can be found including amphibian species such as the Tokyo salamander and the Japanese brown frog, wild orchids, as well as other indigenous species. The Ooyamasenmaida Preservation Committee has, from its inception, not only provided farming experiences, but also educated people about how the farming activities and ecosystems of agricultural communities are intricately linked.

To better preserve ecosystems in the terraced rice paddies, city residents, local famers, and experts are working together to:
1. Survey and create a list of living organisms that inhabit the region’s satoyama.
2. Create a guide to the area’s living organisms.
3. Training agricultural interpreters who can conduct farm experience workshops and nature observation workshops.

With local farmers and city residents taking part from the early stages, even in surveys, they can learn about the rich ecosystem of the region, and how farming activities are very much connected to biodiversity.

The committee also annually offers these experiences to 3,000 students to teach them about the nature farming ecosystems helps nurture and how closely linked ecosystems are to people’s lives. The committee currently works in Kamogawa City, as well as all across the southern Boso Peninsula to promote and raise awareness for the impressive biota of the region’s satoyama.