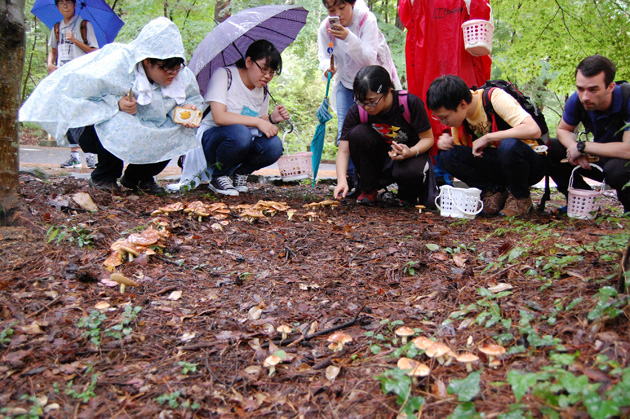 Working with the regional community, the high school prepares specimens and conducts ecological analysis to share information about the biodiversity of mushrooms in the “Futatabi Park” on Mt. Rokko. The results are presented in academic conferences and exhibitions in Hyogo Prefecture as well as in other parts of Japan. 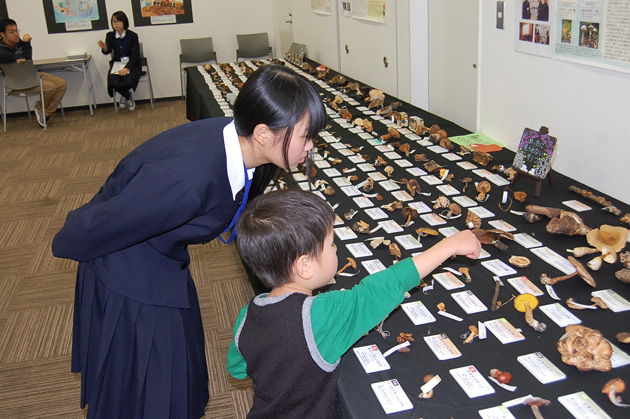 Since FY2007, the Hyogo Prefecture Mikage High School Environmental Studies Living Organisms Team has been working with many groups such as the citizens’ group, “Society for study of Fungus-Hyogo,” Museum of Nature and Human Activities – Hyogo, Botanical Garden-Kobe and the Kobe YMCA to share information about the biodiversity of mushrooms in the “Futatabi Park” on Mt. Rokko. They are working to create a “visible record of biodiversity” by observing mushrooms and preparing specimens. And the ecological analysis aims to gather “quantitative data on biodiversity.”

The observation of mushrooms is conducted together with the Society for study of Fungus-Hyogo , which helps with the identification of species. Team also works with Museum of Nature and Human Activities – Hyogo to learn techniques for preparing specimens and methods for ecological analysis. Furthermore, the Botanical Garden-Kobe and the Kobe YMCA provide venues for exhibitions and collaborate to organize events such as the “Mushroom Festival” and “Kids Mushroom Observation Session” in order to activate the region. Last fiscal year, Team also exhibited the specimens and shared their findings about mushroom biodiversity in other prefectures, for example, at events held at the Okayama Takashimaya Department Store (Okayama City), Fukui Athome Nuclear Center (Tsuruga City), and the “KINO-1 Grand Prix” (Tokyo Prefecture) organized by Bio Cosmo.

With respect to ecological analysis, the team analyzed the “propensity of mushrooms to appear in the park,” “forecasted mushroom species that may appear in the future,” and the “temperatures and the amount of rainfall mycorrhizal fungi and saprobe prefer.” The findings from the research was then presented at the Ecological Society of Japan, the Mycological Society of Japan, Kyoto University Academic Day, the Meeting for the Presentation on the Protection Activities of Wildlife, National Youth Environmental Activity Presentation Contest, etc.

A forest with a diverse species of mushrooms is home to a well-balanced ecosystem. By monitoring the park over long periods of time, the team hopes to keep an eye on the state of the mushrooms in the park, and to share the findings with a great many people.