A tool of biodiversity conservation in paddy fields, “Ikimono-genki-mai” 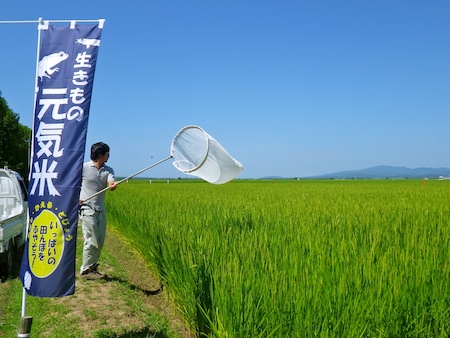 “Ikimonogenkimai” is rice created without aerially-sprayed pesticides and herbicides of the levee. This NPO researches the biodiversity of each plot of paddy field, and then lists the living organisms found there on the packaging. You can see by whom the rice was made, and where and what the area was like. 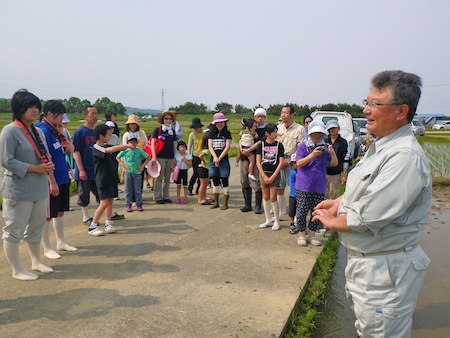 The Kahokugata region in Ishikawa Prefecture is characterized by rice paddies, which are important habitats for many organisms. Many wild fowl can be found there, and it is one of the few places where Japan’s longest earthworm, Drawida hattamimizu Hatai, can be found.

In recent years however, biodiversity in the paddies has begun to deteriorate. In the past, there were many hattamimizu, but now they have become an endangered species. Morever, marutanishi (Bellamya [Cipangopaludina] chinensis laeta) or pond snails used to be available in abundance, so much so that the locals used to eat them daily, but these snails can now hardly be found. Japanese killifish have also become a rare presence and residents also rarely hear frogs and toads. Many farmers, who know what it was like when the paddies in the Kahokugata region were alive with a wide diversity of living organisms, want to change the current situation.

That is why the Kahokugata Lake Institute began working with farmers in the region to cultivate “Ikimonogenkimai.” This rice has been cultivated without aerially spraying neonicotinoid insecticides and by mowing the dikes to remove weeds instead of using herbicides. Use of insecticide drastically decreases the number of living organisms in the paddies. Also when herbicides are frequently used on dikes, the soil dries out, so it is believed that use of insecticides and herbicides significantly affects the ecosystem in the rice paddies and surrounding areas.

While the rice is being cultivated, the researchers of the Kahokugata Lake Institute survey living organisms in each paddy. By keeping quantitative data on the diversity and population of living organisms in the paddy, the institute proves what benefits these organic practices are having, and thereby adds value to the cultivated rice. Results of the diversity surveys and the names of the farmers who cultivated the rice, as well as the “Ikimonogenkimai Certificate” are displayed on the package.

They hope that “Ikimonogenkimai” will help create a healthy habitat for living organisms, provide consumers with safe, organic rice, and also help sustainable farming practices such as these become more widespread.